J. Rotbart & Co. offers precious metals and other valuables, Vault storage locations solutions at reputable, independent vault storage locations facilities around the world. Storage is fully segregated and allocated per client, and is covered by extensive liability policy for physical loss. Clients enjoy the services of the world’s leading experts in the storage of bullion and valuable assets. Clients also reap the benefits of using a privately owned vault, rather than a bank vault, which include confidentiality and easy 24/7 access.

All vault storage locations are in tax-free zones or are operated bonded warehouses. All vaults have state of the art facilities, guaranteeing security, privacy and easy access for clients to visit their precious metals holdings. We offer competitive pricing for our all-inclusive services, ensuring the best options for our clients to trade and vault bullion privately and safely. 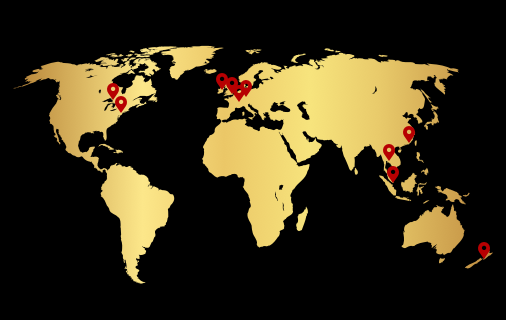 TORONTO
As the capital city of the province of Ontario, Canada, and North America’s fourth-largest city, Toronto has very low crime rates and is one of the least corrupt economies in the world built on British common law. Highly diverse, half of Torontonians were born elsewhere. Home to Canada’s largest stock exchange, it is also close to the Canadian Royal Mint, producers of the widely popular Canadian Maple coins. The proximity to the mint guarantees quick delivery and easy international access for clients to visit the vault.

NEW YORK
As the most densely populated city in the USA boasting the 12th highest GDP in the world, New York is headquarters to the United Nations and a world-class megacity with a vibrant stock exchange. The US ranks second in the world for physical gold holdings, vaulted mostly in New York, which is within proximity of the US Mint, producers of the American Eagle and Buffalo coins. Clients can rest assured of the easy international access and strong economical environment to safe keep their physical precious metals. Certainly one of the very best Vault Storage Locations in the world.

LONDON
As the most populous city in the United Kingdom, London houses over 480 operational overseas banks. Boasting the world’s largest airport city airport system, it is the world’s most visited city. Just behind New York, London vaults hold the third-largest amount of gold in the world. With an extremely active bullion market and home to the authority on the precious metals industry standardization – the London Bullion Market and the London Platinum and Palladium Market, clients enjoy the easy international access to their holdings in the largest financial metropolis in the world.

FRANKFURT
Frankfurt emerges second as the best city to live in according to the Urban Land Institute and PwC’s Emerging Trends in Real Estate report for Europe in 2018. Headquarters to the European Central Bank, German Federal Bank, and Deutsche Bank, it has a bustling stock exchange and boasts itself as one of the most transparent cities in the world of business. Frankfurt has a high employment rate and enjoys a diverse population. Frankfurt is also the European hub for the most reputable gold and silver international dealers, and therefore offers easy access to the best precious metals bars and coins.
Clients can access their precious metals holdings easily in this alpha world city.

ZURICH/GENEVA
Switzerland is one of the world-renowned vault storage locations, for its extensive range of banking and wealth management houses, is also the proud home to four of the major internationally recognized gold refiners – Argor-Heraeus, PAMP, Valcambi, Metalor, with whom J. Rotbart & Co. has close existing working relationships with. Switzerland refines about 70% of the world’s gold and is known as the gold hub of the world due to its exceptional level of security and financial stability. Whether in the financial center of Zurich or the private banking hub in Geneva, clients can rest easy that their gold is delivered quickly due to proximity.

BANGKOK
As the third-largest gold market after India and China, Thailand has a developed and mature gold market. Bangkok is the capital and most populous city in the Kingdom of Thailand. The Asian investment boom in the 80s and 90s saw Bangkok emerging as a regional hub for many companies and currently ranks sixth among Asian cities in terms of per-capita GDP. Ranked by both MasterCard and Euromonitor International as one of the world’s top international cities to visit, clients can conveniently visit their physical precious metals with ease at this vault storage locations.

HONG KONG
Also known as “Asia’s World City”, the Hong Kong Stock Exchange is the world’s seventh-largest trading entity and the Special Administrative Region houses one of the world’s busiest port. The Hong Kong gold market trading is consistently one of the most active in the world. One in seven in Hong Kong is a millionaire, thanks to the vibrant property and stock market landscape. Consistently placed in the top three as the most friendly places to set up business entities, clients are able to easily visit their precious metals holdings due to the international nature of the city.

SINGAPORE
Singapore has one of the world’s richest sovereign reserve funds and is the only country in Asia with an AAA credit rating from all of the world’s major rating agencies, indicating zero corruption. The port and Changi International Airport have held the titles of “Best Maritime Port” and “Best Airport” respectively for consecutive years. With support from the stable government, the Singapore Bullion Market Association is a well-respected authority regionally. Whether stored in the world-renowned Singapore Freeport facility, or in the city center safe deposit facility, clients can rest assured their holdings are vaulted in a safe and flourishing international city.

WELLINGTON
As the capital of New Zealand, Wellington has very low crime rates and is one of the least corrupt economies in the world built on British common law, similar to that of Toronto. It consistently ranks high in international national performance. With a large landmass, New Zealand’s unique geographical location ensures exclusive privacy for clients wishing to store their precious metals holdings away from mainstream cities. Clients can have peace of mind that their bullion is kept in a stable economy. one of the safest and secure vault storage locations in the southern hemisphere.